Moms have been know to say some funny things.  Here is a collection of funny quotes made by moms. 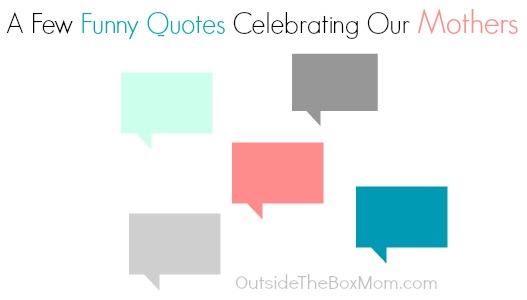 We’ve known them since the day we were born, and they’ve cared for us through the good times and the bad. Whether they’re dealing with a stubbed toe or a poor grade, you can trust them to be there with a few choice words to get you back on track. But isn’t it about time we offered some choice words back to the most important woman in our lives? That’s right—we’re celebrating mothers with a few funny quotes.

“When your mother asks, ‘Do you want a piece of advice?’ it is a mere formality. It doesn’t matter if you answer yes or no. You’re going to get it anyway.” – Erma Bombeck

Famous for her musings on domestic life, raising kids and being the figurehead around the house, Erma Bombeck always knows the right thing to say. For 30 years, mothers chuckled through her books Just Wait Until You Have Children of Your Own, and If Life is a Bowl of Cherries, What Am I Doing in the Pits? She was a true pioneer in mother-centric literature and her humorous quotes are always fit for a giggle.

“If evolution really works, how come mothers only have two hands?” – Milton Berle

The cheesy-grinned Milton Berle pays his dues to the hardest-working women in the world by offering them a bit of evolutionary insight. Most mothers would agree that a couple of spare arms wouldn’t go amiss when you’re trying to contain a child having a tantrum on the floor of the local drug store!

“I felt my mother about the place. I don’t think she haunts me, but I wouldn’t put it past her.” – Julie Walters

English actress and novelist Julie Walters shows us that just because some of our mothers have passed on doesn’t mean we can’t have a chuckle about them. Julie’s mother must have liked a bit of a joke herself, particularly if she’s ribbing Julie from the afterlife.

“I want my children to have all the things I couldn’t afford. Then I want to move in with them.” – Phyllis Diller

Trust the funniest and most self-deprecating woman in comedy to come up with a joke like this. Phyllis Diller is right—it’s good to know that once you have raised your children to be fine, upstanding members of the community, you have something to fall back on in your later years!

“Mothers all want their sons to grow up to be president, but they don’t want them to become politicians in the process.” – John F. Kennedy

While it’s a given that the Kennedys were proud of all their son accomplished, it does have to be duly noted that while “President” sounds like a prestigious job title, “politician” doesn’t have quite the same ring to it.

“If there were no schools to take the children away from home part of the time, the insane asylums would be filled with mothers.” – E.W Howe

The sharp wit of E.W. Howe was well known throughout his work in magazines, newspapers and his books. But mothers out there will agree that this quote shows off just how astute he was about life! We wouldn’t be here without our mothers, and for that we are eternally grateful. If you liked these funny quotes about motherhood, make sure you share them with your mom. All moms deserve a laugh every once in a while!

Latest posts by RAKI WRIGHT (see all)
Previous Post: « Fun Things to Do in the Summer: Movies on the Cheap
Next Post: Nail Art ( & Red Carpet Manicure Sweepstakes) »