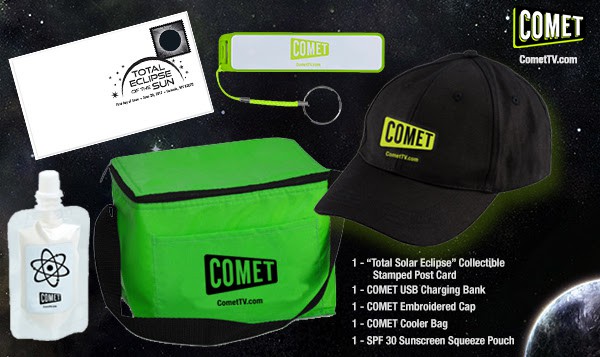 A SOLAR ECLIPSE IS IMMINENT!
On Monday, August 21, 2017, a solar eclipse will be visible across all of North America. The whole continent will experience a partial eclipse lasting 2 to 3 hours. If you care about the well-being of Earth and you’re a space-head like us, check out COMET’s…

“When The Moon Throws Shade”
Ultimate Guide to Eclipsing

Invasion of the Body Snatchers
Most of the time, we’re not big fans of remakes. But once in a while, a remake comes along that vastly outshines its inspiration. Invasion of the Body Snatchers, the 1978 reboot of the 1956 sci-fi thriller, is one of those remakes. Not only that, it’s maybe the best remake ever made, and with stars like Donald Sutherland, Jeff Goldblum, and Leonard Nimoy, it’s not hard to see why. The invasion begins on August 25 at 8P/7C, with an encore airing at 8P/7C on August 26.

1 – “Total Solar Eclipse” Collectible First Day Issue Stamp – Straight from the USPS this is the official commemorative first-day issue stamp. The commemorative USPS first day issue stamp is heat sensitive so if you put your thumb on it, it will get lighter, revealing more of the picture underneath. This is the first time the USPS has done this!

1 – Comet USB Charging Bank – Do you want to snap a selfie and oh no, you only have 10% power left? Fear not, Comet has you covered. This awesome charger is the perfect save for any emergency situation!

1 – Comet Embroidered Hat – An official Comet TV hat is perfect for any ensemble. It will protect you from the sun, while you look more stylish and awesome than you already are!

1 – Comet Cooler Bag – This fun https://www.globosurfer.com/rtic-vs-yeti-coolers/ is the go-to gear for your sodas, snacks and anything else you want to put it in. Take it to the park when you’re about to watch the eclipse and let your beverages stall chill and frosty, just like you!

1 – Limited Edition Comet SPF 30 Sunscreen Squeeze Pouch – We can’t let you get toasty out in the sun! This limited edition SPF 30 sunscreen pouch can go in your travel bag and let you avoid a nasty burn!

This promotion is open until September 4, 2017 at 11:59 pm EST and is limited to US residents, 18 years or older.  The winner will be chosen randomly. Winner must respond to email within 24 hours or prize may be forfeited.  Promotional content and prize for this promotion is provided by and shipped by the sponsor and/or its representatives.  The prize may be sent via FedEx or UPS. No P.O. Boxes please.

Latest posts by RAKI WRIGHT (see all)
Previous Post: « The First Time I Saw Me On TV
Next Post: Quick & Easy Breakfast Idea for Moms »