Talking with kids about drugs, alcohol, and tobacco are important topics to me since I have a 13-year-old son. Here are six things you need to know about vaping. 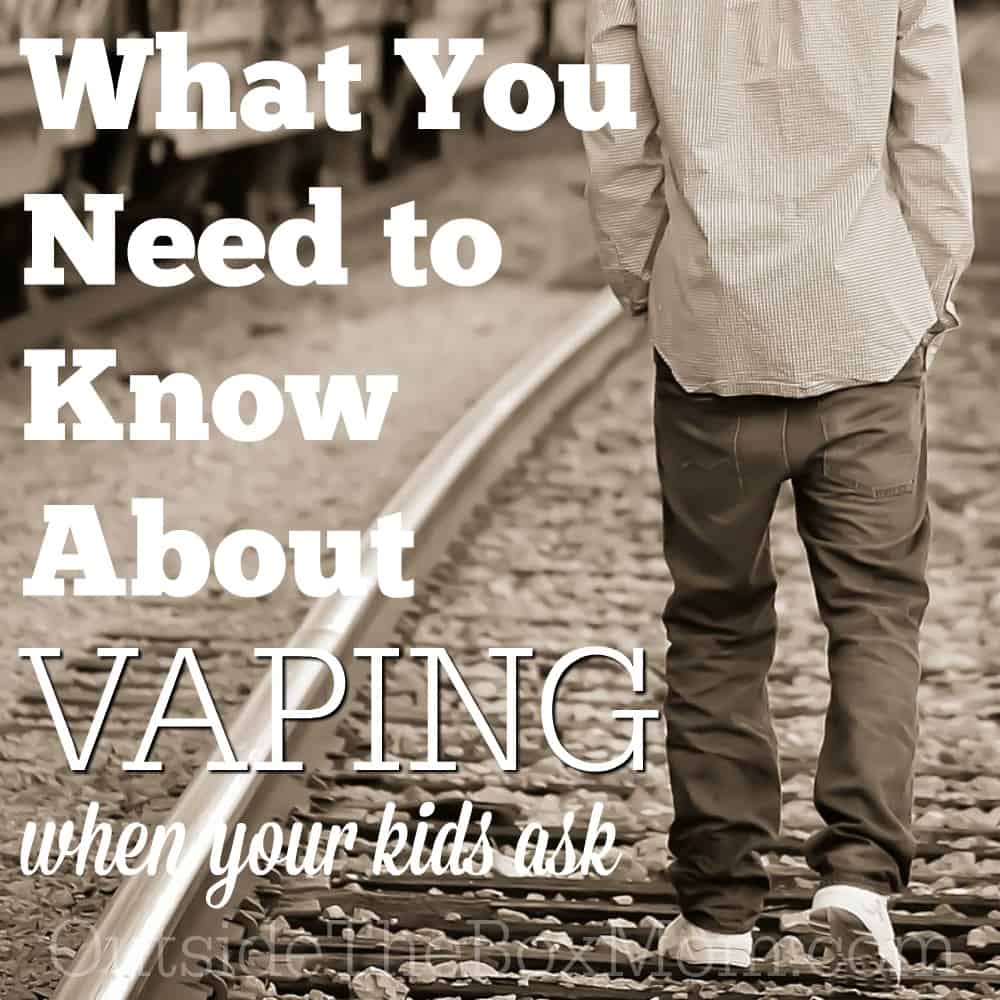 As tweens and teens spend time with friends and older kids, they can be exposed to these things. I believe it is important to talk to our kids about these topics early before their opinions are heavily shaped and influenced by their peers. We should tell them how we feel about these things and provide education, too.

That’s why organizations like D.A.R.E. (Drug Abuse Resistance Education) exist in our school systems. “D.A.R.E. envisions a world in which students everywhere are empowered to respect others and choose to lead lives free from violence, substance abuse, and other dangerous behaviors.”

I have several friends who saw their parents smoke and adopted the habit later in life. Or, maybe they decided at a young age to start smoking. Twenty years later, they were never able to kick the habit.

One of the most recent smoking-related practices is vaping.

You may have heard the term ‘vaping’ or seen people around you using e-cigarettes. However, if you are not a smoker or former smoker, chances are you haven’t paid that much attention to the rise of e-cig culture. Vaping is something of a hot topic among some teens, so when your kids start asking questions about it, it is a good idea to know what it is and why people do it so you can answer them confidently.

Here, we take a look at what you need to know about electronic cigarettes to have an open discussion with your kids. You’ll know the answers to these questions: What is vaping? Is vaping legal? Is vaping addictive? What is in e-liquids? Can you tell when someone has been vaping? What message should I give my kids about vaping?

Vaping is the practice of using an electronic cigarette, also known as an e-cig, with an e-liquid inside it. Together, the device and the liquid produce a vapor that is inhaled. This is done as an alternative to smoking cigarettes. Vaping has become so popular in recent years that the verb ‘to vape’ is now in the dictionary, and it has become popular with some celebrities like Katy Perry and Leonardo DiCaprio.

Vaping is legal, as is the sale of vaping products. Vaping in public places is restricted depending on where you live, however, it tends to be less tightly restricted than smoking cigarettes. However, vaping products cannot be sold to minors. Websites that sell electronic cigarettes and e-liquids are required to verify the age of the customer.

Vaping can be addictive if the e-liquid that is being used contains nicotine. Nicotine e-liquids are designed for use by people who are already tobacco smokers, as an alternative way to get nicotine and avoid withdrawal symptoms. This means that while someone who is not addicted to nicotine may become addicted if they vape a nicotine e-liquid, this is not really who these products are aimed at.

What Is in E-Liquids?

E-liquids are based on either propylene glycol (PG) or vegetable glycerin (VG). These are both substances that are used in lots of other things, like food and cosmetics, and are regarded as harmless. Manufacturers then add flavorings and nicotine to the bases, if it is a nicotine e-liquid.

This means that the vapor produced when it is vaporized by the e-cig device can taste and smell like all kinds of different things, as well as delivering nicotine if the user wants it. Some people choose e-liquids designed to taste like cigarettes, but there are also all kinds of other flavors available like mint, various fruits, desserts, and spices.

Can You Tell When Someone Has Been Vaping?

You can easily tell when somebody has been smoking cigarettes by the smell of tobacco on their breath, clothes, and hair. There can also be other signs like nicotine stains on their fingers. However, while vaping does produce an aroma, this varies depending on the flavor in the e-liquid and is not necessarily easy to spot. Because there is no smoke, the smells tend not to linger like tobacco odors either. Vaping also doesn’t stain fingers or teeth, so if you are concerned your child is vaping, the only real way to know is if you find vaping paraphernalia or see them doing it. This can be why it is a good idea to talk to them about it.

What Message Should I Give My Kids About Vaping?

Vaping is sometimes seen as fashionable, so there may be some peer pressure for kids or teens to try it. Smoke is not inhaled which leads to the argument that it has less of the drawbacks of smoking. However, it is an adult product that is not supposed to be used by minors. Using nicotine e-liquids can leave users with an addiction, and studies show that while nicotine is intended for adults, it may cause problems in children and adolescents. Explain that vaping is designed for adults who are already smokers, and that it is not meant for people who are not smokers to do it. Explain also that there are good reasons why these products are not sold to underage people, and that like other things like alcohol, it is something they shouldn’t get involved with until they are old enough to do it legally and make an informed choice.

Vaping is still something deemed unsuitable for minors, so it pays to know the facts about it so you can have conversations with your kids proactively, when they ask, or when you suspect it might be something they are being exposed to. There have been cases of vape explosion all of over the world and this highlights the safety issues associated with vaping. If you know anyone who suffered from a vape accident, reach out to a vape injury lawyer immediately.

If you need more information, visit the American Lung Association’s website. You may also want to read vaping myths debunked.

Have you had to have this discussion with your kids? 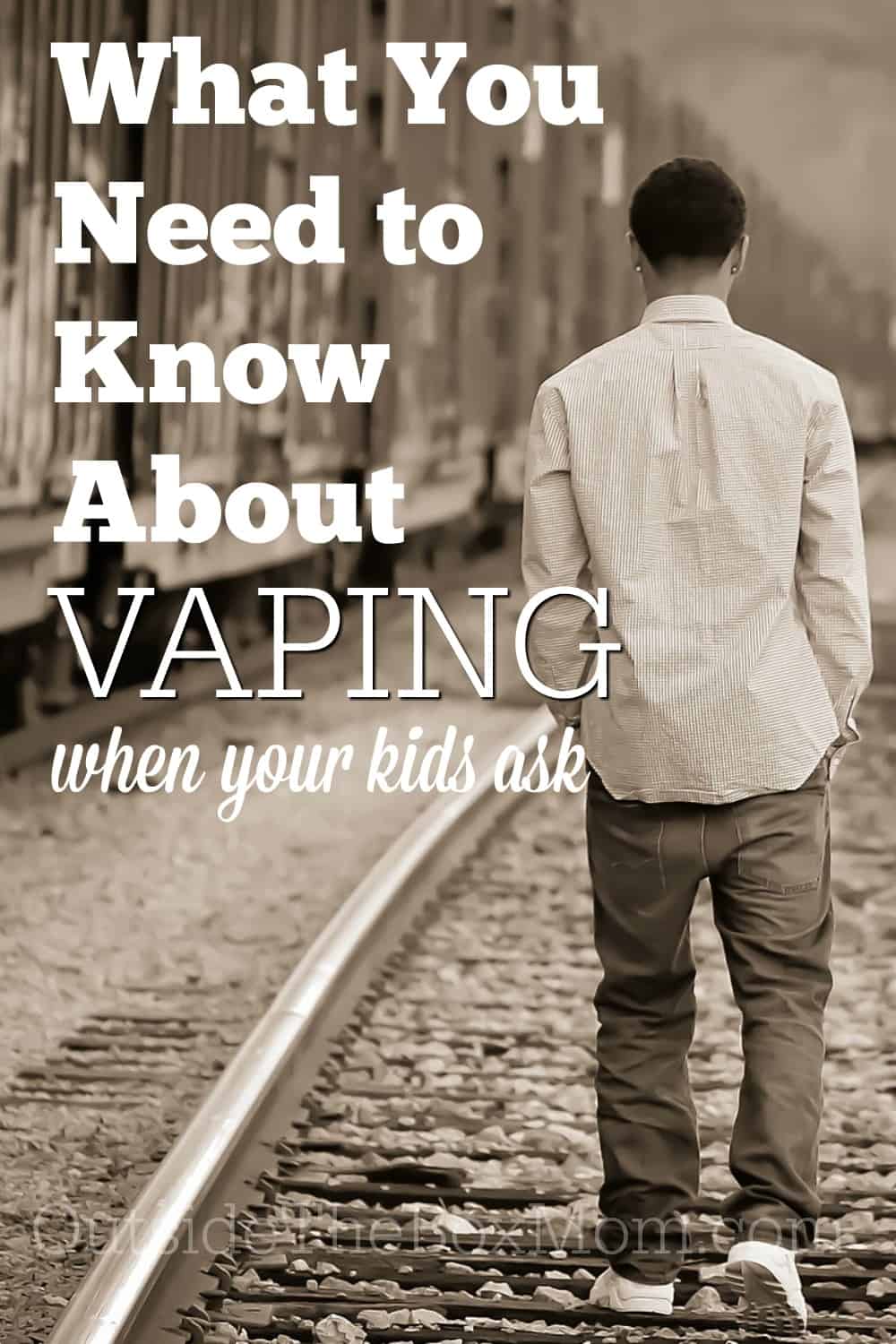 Latest posts by RAKI WRIGHT (see all)
Previous Post: « 5 Ways to Find the Perfect Gift
Next Post: Things to Do in Washington, DC: Omni Shoreham Hotel »