Wondering about the best destinations to escape to during the winter blues? Learn about six great options in this sponsored post. 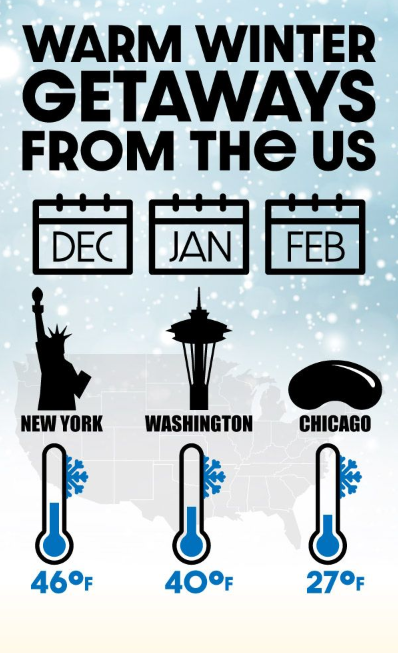 It’s cold this time of year in much of the world and a lot of people could benefit from a vacation to a warm-climate vacation destination. Birds don’t have to be the only species to go South during the Winter!

For my high school senior trip, we took a cruise to Nassau, Bahamas. It was amazing because it was all-inclusive. It made budgeting so much easier because the only additional expenses we had to plan for were souvenirs we purchased during our excursions. And, when meals are included, it’s so much more fun to try new things without the fear of wasting money on something you didn’t enjoy.

Then, before we had kids, my husband and I took a trip to Grand Bahama Island, Bahamas during Christmas break. Although we lived in North Carolina at the time, we’re both from Virginia. It was great to be able to escape the winter cold and snow. It was 80 degrees in the Bahamas, so we got to wear T-shirts and shorts for a whole week…in December.

Our Five Favorite Things to do on Grand Bahama Island:

You can read all about our trip here. Check out the image below to see five great reasons to visit the Bahamas during winter.

Turks and Caicos is an archipelago of 40 low-lying coral islands in the Atlantic Ocean, a British Overseas Territory southeast of the Bahamas. The gateway island of Providenciales, known as Provo, is home to expansive Grace Bay Beach, with luxury resorts, shops and restaurants. Scuba-diving sites include a 14-mile barrier reef on Provo’s north shore and a dramatic 2,134m underwater wall off Grand Turk island.

Check out the image below to see five great reasons to visit the Turks & Caicos during winter. 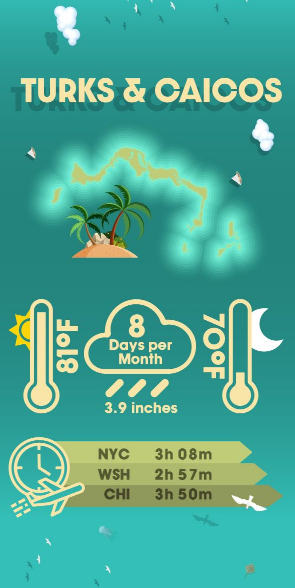 Jamaica, a Caribbean island nation, has a lush topography of mountains, rainforests and reef-lined beaches. Many of its all-inclusive resorts are clustered in Montego Bay, with its British-colonial architecture, and Negril, known for its diving and snorkeling sites. Jamaica is famed as the birthplace of reggae music, and its capital Kingston is home to the Bob Marley Museum, dedicated to the famous singer.

Check out the image below to see five great reasons to visit Jamaica during winter.

Saint Lucia is an Eastern Caribbean island nation with a pair of dramatically tapered mountains, the Pitons, on its west coast. Its coast is home to volcanic beaches, reef-diving sites, luxury resorts and fishing villages. Trails in the interior rainforest lead to waterfalls like the 15m-high Toraille, which pours over a cliff into a garden.

Check out the image below to see five great reasons to visit Saint Lucia during winter.

Check out the image below to see five great reasons to visit Grenada during winter.

Antigua is one of the 2 major islands that make up the Caribbean nation of Antigua and Barbuda. Ringed with coral reefs, the island is known for its many sandy beaches. Set along English Harbour, restored Nelson’s Dockyard, which Admiral Horatio Nelson made his base in the 1780s, includes a marina and the Dockyard Museum. Trails lead up to Shirley Heights, a former military lookout with panoramic views.

Check out the image below to see five great reasons to visit Antigua during winter.

Check out all of the options at the Official Beaches website. All images provided by Beaches.

Latest posts by RAKI WRIGHT (see all)
Previous Post: « Simplify: Tips for Adopting a Minimalist Lifestyle as a Mom
Next Post: How to take care of your printed Tshirt? »