During family holiday gatherings, many couples will be faced with invasive questions by well-meaning relatives. If you struggle with fertility, this can be a very sensitive subject. 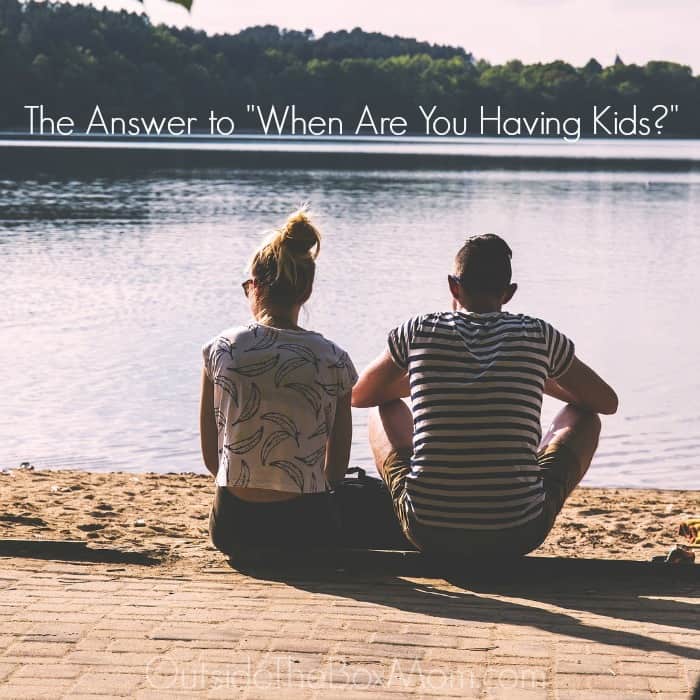 This post will provide advice on how to navigate those conversations with authors Chrissie and Aaron Kahan, after enduring a four-year battle with infertility.

Unfortunately, that’s all people, not just family members that think it’s ok to ask personal questions. Sometimes they could be trying to be invasive. Usually though most of the time people are genuinely trying to engage you in a conversation in order to connect more deeply with you.

Family members especially tend to not have a filter and go right for the deeply personal questions because they already know you through the good, bad and ugly times so they feel it’s their right to be updated. And the small talk with family only goes so far, especially during family gatherings when booze is almost always involved.

Related: 7 Ways to Spend More Time With Your Family

How to answer “When Are You Having Kids?”

When you’re single, then engaged, then married

If you don’t want kids

My one friend, shortly after she got married, actively answered this question by launching into all the reasons she and her husband didn’t want kids. Imagine the reaction from Sex and the City II

told a fan she and Mr. Big

would never be parents. That was the typical response people would give her with a confused, wounded look like they were deeply saddened for this couple because it would just be the two of them. So that route is always an option. The benefit of that one is normally people end that conversation quickly, anxious to get away from the discomfort it causes them.

The rest of the options though are only going to lead to more discussion where people will share their own stories and will offer unsolicited advice.

When you’re an open book

If you’re an open book like me, who immediately got sick of this question, you can put your situation out there to stop the incessant line of questioning.

When you are private

If you are not as comfortable or as forthcoming, which is absolutely OK, you can try by giving a quick noncommittal answer to the question or stating something to the effect of: “not yet” then walking away to leave them wondering.

If you’re the class clown

You can also use humor to deflect by stating something to the effect of: “We’ll see but until it happens we are having fun trying.” Practice saying it until you can convey the nonchalant attitude needed to deliver this statement. A wink and half smile at the end really tops it off convincing them you’re confident and going to be pregnant soon.

If you are a person of faith

Or you can use the spiritual response: “Not yet, but we know God has a plan so when it happens it will be in his timing.” People will usually respond that they’ll pray for you and hey that’s the best response because when dealing with infertility or treatments with specialists from the best IVF clinic, all prayers are appreciated.

If you are wondering when a certain person is going to have kids, you can usually tell how they are feeling about it by monitoring their reactions in certain situations.

People struggling with infertility are usually good at putting on an emotional mask to hide their inner suffering. However, the look in their eyes, body language and non-verbal cues normally give them away.

Do they have a saddened, longing in their eyes? Are they actively avoiding these situations and topics? Do they ever talk about how unfair it is that certain people can conceive? Do they bolt when the new baby is brought in or look like their about to burst into tears after holding said baby?

These are your clues that they are probably struggling with infertility. Whether it’s you or someone else though, inevitably this question will always arise.

How to deal with personal questions in the workplace

This is especially hard and depends on the personal/professional boundaries you have set for yourself in the workplace. We all almost always have an inner circle of friends who are also co-workers that it’s easy to divulge personal information to.

See which of the options I previously suggested would work for you.

Just know that it will probably be the loudest co-worker you have asking you and putting you on the spot, at the most awkward time.

‘s advice: “seek first to understand, and then to be understood.” This is always a good motto in the workplace when dealing with a variety of personalities.

How to decide how much of your infertility struggles to share

I had a friend who also works in the school system lose her cool with a co-worker because they simply asked why she was absent the day before. The co-worker was just trying to make conversation having no idea my friend was out because she was having her second miscarriage.

She ended up snapping and saying: “I was out having a miscarriage OK!” Then storming off.

My friend had only told a close-knit group within the school about her ongoing battles. She personally was just more comfortable with keeping it to herself.

The downside of doing that is going through those difficulties causes so many emotions. So if you try to stuff them down, dealing with them alone internally and not actively acknowledging them, they will bubble up and come out uncontrollably.

I was completely different and put it all out there for several reasons. I have a hard time keeping my mouth shut, my emotions are normally written all over my face and I knew I would need the support.

Once I shared my struggles I couldn’t believe the floodgate that it opened up around me of so many people in my life spanning age ranges that had or were also struggling with infertility. It’s like a secret club that you never want to be a part of. But the comradery of it is what has helped me the most.

The bottom line is that it is YOUR infertility journey you are navigating and no one else’s. No one has the right to tell you how you should feel or what the best thing to do is.

You do whatever makes you feel comfortable because you will be feeling a spectrum of emotions repeatedly. Just know that you are not alone. 7.3 million American women are also struggling with infertility along with 1 in 8 couples.

Many thanks to Christine and Aaron for sharing their struggles and advice!

Christine and Aaron Kahan, who recently wrote a book called Navigating the Road of Infertility

, recounting their four-year emotional roller coaster including respective surgical procedures, a devastating failed attempt to “Foster to Adopt” two little girls and a failed round of In-Vitro Fertilization (IVF) and sadly another miscarriage this past month.

What do you say when family members ask personal questions?