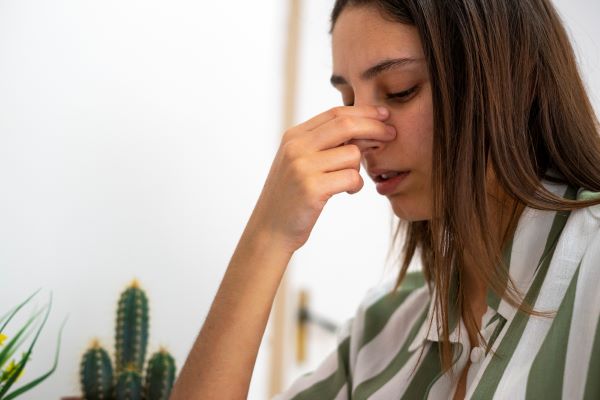 Several people live their lives without knowing if their septum is aligned or misaligned.

So, what is deviated septum, and what impact does it have on your sleep? Does a deviated septum cause other side effects? Let’s learn about these in depth.

What is a Deviated Septum?

A deviated septum relates to the misalignment of the cartilage in your nose. The septum is a bar between the two nasal passageways. This ensures that the air flows evenly in and out of the right and left nostrils.

When the cartilage is not aligned with passageways, it creates an imbalance in airflow. One passageway can be partially or fully blocked when this happens. It leads to breathing difficulties and disturbs sleep at night.

Causes and Signs of Deviated Septum

Occasionally, people inherit deviated septums. In fact, around 80% of people have this issue, while only a portion of them are aware of it.

The septum can be misaligned due to injuries, accidents, trauma, or incorrect nasal surgeries.

The following are a few signs of deviated septum:

You can have more than one symptom, depending on the severity of the condition. A misaligned septum can cause mild to severe health issues.

Fortunately, the nasal septum can be treated in many ways. Correction nasal surgeries (septoplasty) are also performed in some cases.

Impact of Deviated Septum on Your Life

A deviated or misaligned septum can hurt your life. Everyone is not impacted the same way, but it does disturb your health in some way. For example, a deviated septum can cause:

Breathing difficulties even during normal conditions (when you don’t have a cold). This makes it hard to take part in physical activities. A blocked nasal passage makes it very hard to breathe and get sufficient oxygen into the body.

Persistent sinus infection caused by blockage of the nasal passage. The mucus in the sinus leads to bacterial activity over time. You might have to get the sinus blockages removed at the hospital.

Nosebleeds by drying out one air passage more than the other. When you have to breathe through a single air passage most of the time, it dries the membrane inside and results in random nosebleeds.

How Deviated Septum Affects Your Sleep?

A deviated septum can mess up your sleep by affecting your breathing patterns. Irregular breathing will wake you up often through the night. It also becomes difficult to fall asleep when you have a stuffy nose.

A misaligned septum limits the airflow within the nasal passageways. It reduces or completely obstructs your breathing when asleep.

But the body continues to draw enough air from the narrowed/ blocked passageways and/ or through the mouth. This leads to sounds called snores.

In many instances, a person who snores is not aware of it. The pitch and range of snores vary depending on how much airflow is restricted due to the deviated septum.

Obstructive sleep apnea is the most frequently found in people. This happens when the upper airway collapses partially onto itself.

It leads to temporary stopping of breath. When a person pauses breathing for some time while sleeping, the body jolts them awake to kickstart the process.

When it repeats through the night, it leads to sleep apnea, where a person cannot fall asleep or wake up multiple times during sleep.

However, sleep apnea has several other causes, such as smoking, alcohol consumption, obesity, family history, etc. It becomes imperative to talk to your doctor a doctor to correctly diagnose the reason and get the necessary treatment.

A nasal drip is where the mucus drops down the back of your throat. While this is a common occurrence, the feeling is more pronounced in people with a deviated septum.

The mucus thickens due to the delay in movement (because of the blocked pathways) and creates a sensation of something slimy sliding down your throat. You can feel it when lying face up on the bed.

You can improve the quality of your sleep despite the deviated septum by changing your sleeping positions. Consult your physician if the problem persists.

Medication like nasal steroids can reduce the symptoms to a great extent. Neglecting it can adversely affect your health.

Latest posts by RAKI WRIGHT (see all)
Previous Post: « 4 Benefits Of In-Home Covid Testing You Haven’t Thought About
Next Post: Small and simple diet changes that have some big benefits »