During Black History Month (or any time of year), there are some great books you can read with your kids. These educational titles will help your kids understand history, relate to historical figures, and inspire their futures. 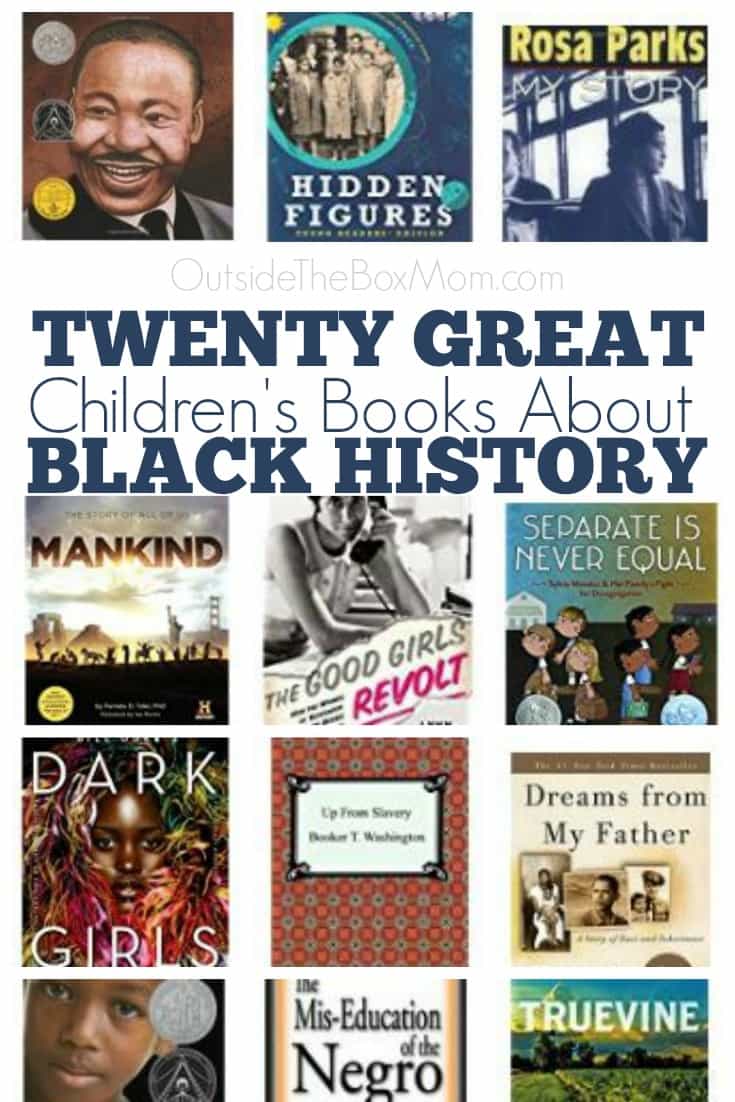 As a child, I don’t remember having many black characters in the books I read. Some of my favorite things to read were the Peanuts comics

strip, any book by Roald Dahl

, and the Babysitter’s Club

. I loved getting books from the school library, going to the public library and shopping at our local Paperback Exchange.

I don’t remember seeing any characters that looked like me. Thankfully, my kids have a much larger selection of children’s books to choose from with brown characters of all shades for them to identify with — and many of them have been written by black authors, too.

I’ve rounded up 20 books about Black History you can read with your kids. Add these books to your shelf, and get the kiddos ready for story time!

20 Books About Black History to Read With Your Kids

– The true story of the black female mathematicians at NASA whose calculations helped fuel some of America’s greatest achievements in space.

2. Dreams from My Father

– In this lyrical, unsentimental, and compelling memoir about Barack Obama, the son of a black African father and a white American mother searches for a workable meaning to his life as a black American.

3. The Mis-Education of the Negro

– The thesis of Dr. Woodson’s book is that blacks of his day were being culturally indoctrinated, rather than taught, in American schools.

: Two Brothers, a Kidnapping, and a Mother’s Quest: A True Story of the Jim Crow South – The true story of two African-American brothers who were kidnapped and displayed as circus freaks, and whose mother endured a 28-year struggle to get them back.

– The Good Girls Revolt also explores why changes in the law didn’t solve everything. Through the lives of young female journalists at Newsweek today, Lynn Povich shows what has––and hasn’t––changed in the workplace.

6. Is Everyone Really Equal?

– Class does make a difference in the lives and futures of American children. Drawing on in-depth observations of black and white middle-class, working-class, and poor families, Unequal Childhoods explores this fact, offering a picture of childhood today.

– An inspiring story of a modern American icon, here is the first comprehensive account of the life and times of Michelle Obama. With disciplined reporting and a storyteller’s eye for revealing detail, Peter Slevin follows Michelle to the White House from her working-class childhood on Chicago’s largely segregated South Side.

10. The Autobiography of Malcolm X

– Malcolm X, the Muslim leader, firebrand, and anti-integrationist, tells the extraordinary story of his life and the growth of the Black Muslim movement to veteran writer and journalist Alex Haley.

11. Can’t Stop Won’t Stop: A History of the Hip-Hop Generation

– Based on original interviews with DJs, b-boys, rappers, graffiti writers, activists, and gang members, with unforgettable portraits of many of hip-hop’s forebears, founders, and mavericks, including DJ Kool Herc, Afrika Bambaataa, Chuck D, and Ice Cube, Can’t Stop Won’t Stop chronicles the events, the ideas, the music, and the art that marked the hip-hop generation’s rise from the ashes of the 60’s into the new millennium.

– Rosa Parks is best known for the day she refused to give up her seat on a segregated bus, sparking the Montgomery, Alabama, bus boycott. Yet there is much more to her story than this one act of defiance. In this straightforward, compelling autobiography, Rosa Parks talks candidly about the civil rights movement and her active role in it.

– This biography tells the story of Gabby Douglas, the American gymnast who made history at the 2012 Summer Olympics by becoming the first black woman to win the Individual All-Around Championship.

15. 1001 Things Everyone Should Know About African-American History

– Mankind is a sweeping history of humans from the birth of the Earth and hunting antelope in Africa’s Rift Valley to the present day with the completion of the Genome project and the birth of the seven billionth human.

17. Dark Girls – In Dark Girls, celebrities such as Lupita Nyong’o, Vanessa Williams, Sheryl Lee Ralph, Judge Mablean Ephriam, Brandi and Karli Harvey, and over seventy-five other outstanding women share intimate insights into what their dark skin means to them.

18. The Watsons Go To Birmingham – Christopher Paul Curtis’s alternately hilarious and deeply moving novel, winner of the Newbery Honor and the Coretta Scott King Honor, blends the fictional account of an African American family with the factual events of the violent summer of 1963.

19. Up From Slavery – “Up From Slavery” is the classic autobiography of one of the most controversial figures in American history, Booker T. Washington. “Up From Slavery”, recounts Washington’s rise from a Virginia tobacco farm slave to his long standing tenure as President of the famed Tuskegee Institute of Alabama.

20. Separate Is Never Equal – When Sylvia Mendez moved to Westminster, California, in the 1940s, she quickly found out that not everyone was welcome in her new neighborhood. Eventually, the Mendez family and others filed a lawsuit, Mendez v. Westminster, that predated Brown v. Board of Education by almost 10 years. It would desegregate schools in California, affecting more than 5,000 Latino children.

What Black History book would you add to this list?

Latest posts by RAKI WRIGHT (see all)
Previous Post: « How to Actually Make Your Dreams Happen This Year
Next Post: 4 Must-Have Travel Safety Tips for Busy Families (From a Tow Truck Expert) »