Enter to win The Hobbit The Battle of The Five Armies Blu-Ray. #Giveaway #TheHobbit 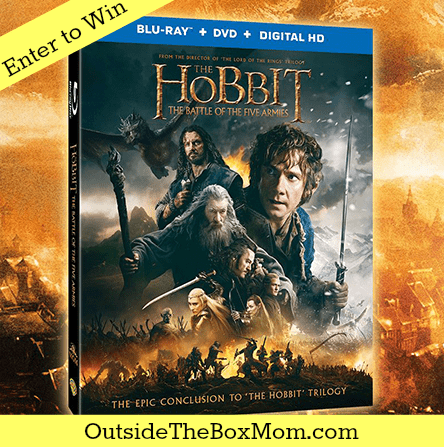 Special Features on the Blu-Ray combo pack include:

Why you will LOVE The Hobbit The Battle of The Five Armies App:

• Are you Brave like Bilbo? Take the quiz to find out if you have the bravery it takes to journey through Middle Earth!
• Mouse over the Interactive Map to learn fun facts about Middle-Earth.
• Watch the official trailer & click the box art to bring the film home today!

This promotion is open until April 23, 2015 at 11:59 pm EST and is limited to US and Canadian residents, 18 years or older.  The winner will be chosen randomly. Winner must respond to email within 24 hours or prize may be forfeited.  Promotional content and prize for this promotion is provided by and shipped by Warner Home Video and/or its representatives.  The prize will be sent via FedEx or UPS. No P.O. Boxes please. Each household is only eligible to win One (1) Blu-ray The Hobbit: Battle of the Five Armies via blog reviews and giveaways. Only one entrant per mailing address per giveaway. If you have won the same prize on another blog, you will not be eligible to win it again. Winner is subject to eligibility verification.