This give away has ended. Win a Return to Nim’s Island Blu-Ray DVD combo pack to celebrate it’s tv premiere on March 15th. 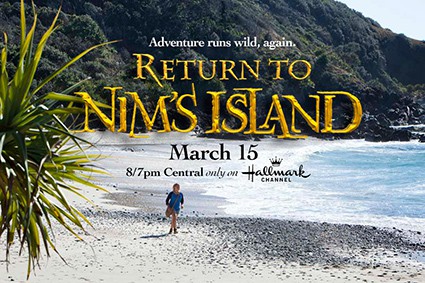 Return to Nim’s Island, the sequel to Walden Media’s 2008 box office hit Nim’s Island, picks up the story a few years later with 14-year-old Nim (Bindi Irwin) more determined than ever to protect her island and the animals that call it home. With ruthless resort developers and greedy wildlife poachers threatening the existence she loves, Nim realizes she and her animal pals can’t defend their home alone. To save her island, she is forced to combine forces with an outsider: Edmund, a runaway from the mainland. Only with his help does she stand a chance of stopping the villains from dismantling her world.

Return to Nim’s Island marks the debut of Walden Family Theater, presented by Walmart and P&G.  The new destination for family entertainment, exclusively on Hallmark Channel.

PLUS! You can pick up your copy of Return to Nim’s Island on Blu-ray & DVD exclusively at Walmart Stores just 4 days after the premiere.

WHY You will love the Return to Nim’s Island Family Adventures Blog App:

This promotion is open until March 25, 2013 at midnight EST and is limited to US residents, 18 years or older.  The winner will be chosen randomly. Winner must respond to email within 48 hours or prize may be forfeited.  Promotional content and prize for this promotion is provided by and shipped by Walden Media & Hallmark Channel and/or its representatives.  The prize will be sent via FedEx or UPS. No P.O. Boxes please. This may be a digital delivery. Please also include email address.