Enter to #win two tickets to #GimmeShelter, which opens in theaters January 24. 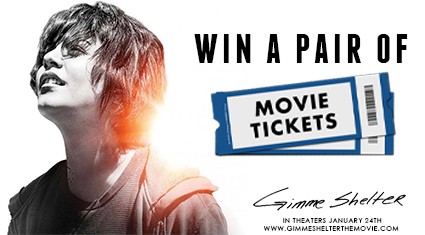 Disclosure:  This giveaway, promotional content, and prize is provided by and shipped by Roadside Attractions and/or its representatives.  No compensation was received for sharing this post.

Being a mother is the toughest job in the world… Period.

Now imagine… you are young, homeless, and without a family to lean on for support.

Based on a true story, Ronald Krauss’ new film “Gimme Shelter,” stars Vanessa Hudgens (High School Musical) as 16-year-old Agnes “Apple” Baily, a teenager who sets out to find her biological father and is forced into the streets in a true journey of survival.

Check out and share the 6 animated gifs to get an inside look at the heart warming tale of Agnes “Apple” Baily before the film hits theaters Friday January 24th, 2014.


How to Win Two Tickets to Gimme Shelter

This promotion is open until January 30, 2014 at 11:59 pm EST and is limited to US and Canadian residents, 18 years or older.  The winner will be chosen randomly. Winner must respond to email within 24 hours or prize may be forfeited.  Promotional content and prize for this promotion is provided by and shipped by Roadside Attractions and/or its representatives.  The prize will be sent via FedEx or UPS. No P.O. Boxes please. Each household is only eligible to win ONE (1) Pack of Two (2) Movie Tickets via blog reviews and giveaways. Only one entrant per mailing address per giveaway. If you have won the same prize on another blog, you will not be eligible to win it again. Winner is subject to eligibility verification.