Check out the Copperhead Blog App and enter for a chance to win an Official Copperhead Movie Pack.

We are proud to announce the arrival of a Civil War movie unlike any you’ve seen before. Copperhead, a film for the whole family, opening in theaters June 28! 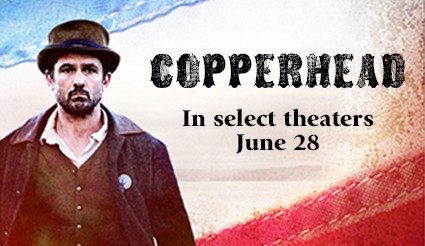 Did you know that this year marks the 150 year anniversary of the Civil War & The Battle of Gettysburg?

We were all taught about the Civil War in school, but how much do we really know about the challenging stories of the brave families during the era? Mothers, fathers, and children all experienced intense hardship as family members left to fight in combat. 150 years later the timeless stories of families affected by war still remain especially pertinent.

Commemorate the 150 year anniversary & keep your kids learning during the summer by catching Copperhead, a Civil War movie the whole family can watch together and talk about!

About Copperhead:
From director Ron Maxwell, (Gettysburg, Gods and Generals) Copperhead is unlike any other Civil War movie. Far from the Virginia battlefield, it’s the exciting story of Abner Beech (Billy Campbell), a peace-loving but stubborn dairy farmer in upstate New York. He detests slavery, but opposes the war for the sake of the “union.” Abner is neither a Yankee nor a Rebel. He is a Copperhead. This is an extraordinary story of family and community. Learn more: http://www.copperheadthemovie.com

Why you will love the Copperhead Blog App:
• Test Your Civil War Knowledge TRIVIA! – Are you a history buff? Love historical speeches, figures, and places? Transport yourself back to the time of the Copperheads and take the trivia to test your Civil War knowledge. Choose your answer before time runs out!
• Behind-the-Scenes – Discover how director/producer Ron Maxwell and his team recreated the exact look of the Civil War era.
• Copperhead Cooking: Recipes PDF –  The family dinner table was an important central focus for every household during the Civil War. Celebrate and appreciate the era by re-creating these easy-to-follow recipes with the whole family before watching Copperhead in theaters.

How to Win an Official Copperhead Movie Pack:

This contest is now over.  The winner has been notified.

This promotion is open until June 10, 2013 at midnight EST and is limited to US residents, 18 years or older.  The winner will be chosen randomly. Winner must respond to email within 48 hours or prize may be forfeited.  Promotional content and prize for this promotion is provided by and shipped by Copperhead and/or its representatives in promotion of the release of the Copperhead Blog App.  The prize will be sent via FedEx or UPS. No P.O. Boxes please. This may be a digital delivery. Please also include email address.