Allowances for children are a topic often debated.  Varying opinions ponder if they are advisable, their uses, and how to determine the amount. Allowances are definitely part of Teaching Kids About Money. 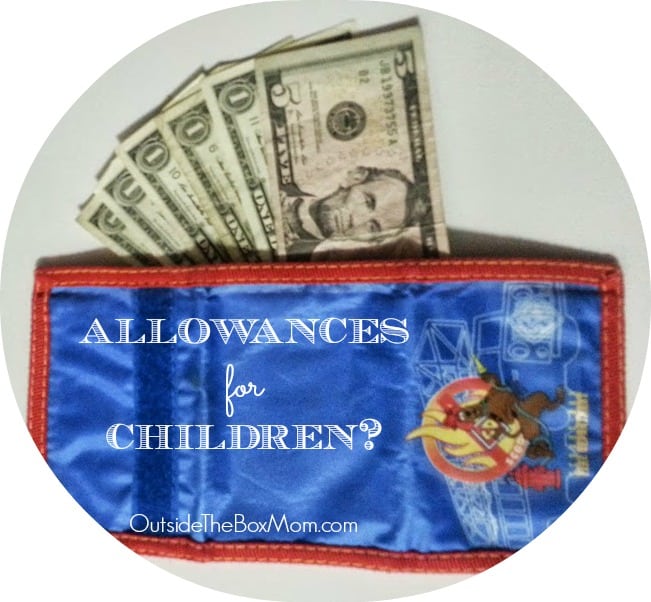 This is a guest by Angie Picardo, a staff writer for NerdWallet.

Sixty percent of parents give their child a weekly allowance. But then, the questions arise.  How much should a child get paid?   At what age should children start receiving an allowance?   What should an allowance be based on and what should it be used for?   Let’s take a look at these basic questions.

Should Children Even Get an Allowance?

As the saying goes, “The early bird gets the worm.” In terms of money in the hands of children, teaching your kids how to handle money at an early age can help them learn to manage finances better in the long run. If you allow your child a specific amount of money at an early age, and gradually increase the amount as he or she grows and matures, they will effectively be able to make wise choices when it comes to money as an adult.

Some parents don’t believe in the concept of an allowance, instead believing that their child can have their own money when they earn it for themselves out in the real world, usually for the first time as a teenager. But the problem with that set-up is this: Money in the hands of a rash, hormonal teenager in a high school environment surrounded by life-altering decisions to make. If a teenager has money that they can call their own for the first time, they may be lured by opportunities to possess, say, drugs and alcohol (or even to just waste their money on silly purchases) in this vulnerable stage of life. After all, this new-found purchasing power only adds to a teenager’s invincibility complex. To avoid this situation, it is a better idea to gradually expose children to money in order to properly teach them how to handle it in a mature manner. Remember, slow and steady wins the race.

What Are Allowances For?

Many parents pay their children allowances in order to rid themselves of the stress of dealing with the “needs” and whimsical desires of their kids. However, parents need to be clear on the fact that allowances are not to teach children how to financially take care of themselves. Instead, children receive allowances to be financially literate and learn, in essence, how money “works.” For instance, instead of immediately gratifying children when they ask for something at the store, teach them how to save their allowances to be able to buy it after some time. Also, keep in mind that it’s important that there should not be enough allowance for your children to immediately gratify themselves.

How Should the Allowance Be Determined?

More often than not, allowances are determined by chores that children do around the house. However, even experts recommend not connecting money to chores. Kids should be expected to do chores because they are part of a family. Kids should not expect to be paid for everything they do. Imagine if your children demanded money to carry their own dishes to the sink. However, there’s no harm done by giving your child a little extra money when they’ve done more than what was required of them or if they’ve been exceptionally responsible.

Another thing to avoid is paying children for good grades. Once children come to believe that the only reason to study is to be consequently rewarded with money for a good grade, they will no longer work hard unless there is a reward associated with the end result. Children should learn to value the hard work and the grade itself, not a monetary reward.

Now the most important question. How should the amount of the allowance be calculated. Many parents determine the amount based on the age of the child. For example, $6 for a six-year-old. However, if you and your child can come up with a reasonable formula to determine the allowance, so be it. Just remember, less is more.

Angie Picardo is a staff writer for NerdWallet. Her mission is to help consumers stay financially savvy, and save some money with the best checking accounts.