In the world of fandoms, we’ve seen an influx in role-playing characters (or cosplays) such as Disney princesses and Harry Potter characters. Fursuits are the latest craze — they are animal costumes that are worn to meet and hang out with other fursuiters. Think Animal Planet meets Comic Con. 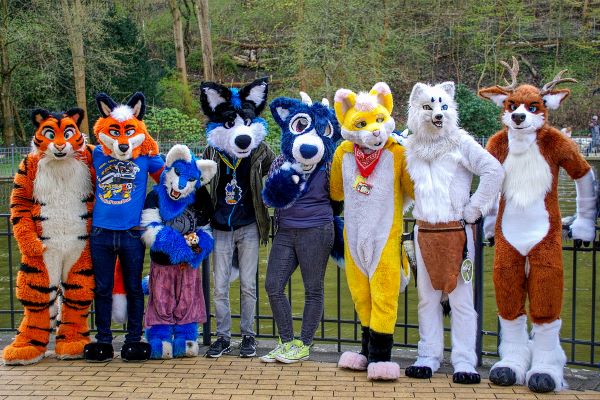 These elaborate costumes can cost anywhere from $500 to $5,000 depending on the maker and materials used. And while these suits can be expensive, some makers are taking it a step further by creating their own business that sells finished or semi-finished fursuits for buyers who want to buy one themselves. There’s a lot that goes into making a fursuit and here’s your look behind the scenes at some amazing makers!

Requirements for a Fursuit

As a fursuit maker, you want to make sure you know what your customer wants out of a fursuit. The first thing your customer will tell you is what character they want to be. This is a must. The other requirements they may have are things like colour, size, accessories like a hat or glasses, and if it’s kid-sized or adult. You can customize anything, but the basic requirements will help you start the process.

Price of a Fursuit

The price of a fursuit is tricky to pin down. Every maker will have their own price as they all have different materials, different skill levels and different time frames they are working on. A full-fursuit can be as low as $500 and go as high as $5,000. The price is up to you, but you can look at other fursuit makers’ prices to get an idea. A fursuit head can cost anywhere from $400 to $1,000 and up. And paws can cost anywhere from $300 to $600. Other materials like fabrics, paint and claws can add up as well.

Materials and Quality in a Fursuit

Materials are very important in a fursuit. They are what makes you feel like the character you’re dressed as. The materials you choose can make or break your costume. You don’t have to use real fur to make a fursuit. There are synthetic fabrics out there that look and feel like real fur. The most important thing to take into consideration is that you should be comfortable in your costume. If it’s too hot, too heavy, or too restrictive, it’s not going to be fun to wear. You want your fursuit to be as close to perfection as possible. That’s why you have to take the time to make it right. Don’t rush the process. Take your time and make sure it’s perfect.

Where to Buy a Fursuit?

Making a fursuit is a massive undertaking. The maker must first decide what species of animal they want to create, and then they must go down a long list of decisions about their character: what kind of shape does the body have? What colour fur does it have? Is it wild or domesticated? What breed is it? What are the markings like? How does the head look? How does the tail look? How does the paws look? It is a process that could take anywhere from a few months to a few years. If you’ve ever wanted to be a furry, now you can be one! All you have to do is find a fursuit maker who will create your costume and you’ll be the star of the show.

Latest posts by RAKI WRIGHT (see all)
Previous Post: « Here Is What Goes Into Getting Medicine On The Shelves
Next Post: Product Liability: Can I Sue the Manufacturer? »