Learn how to easily clean your garbage disposal to eliminate the odor-causing bacteria. 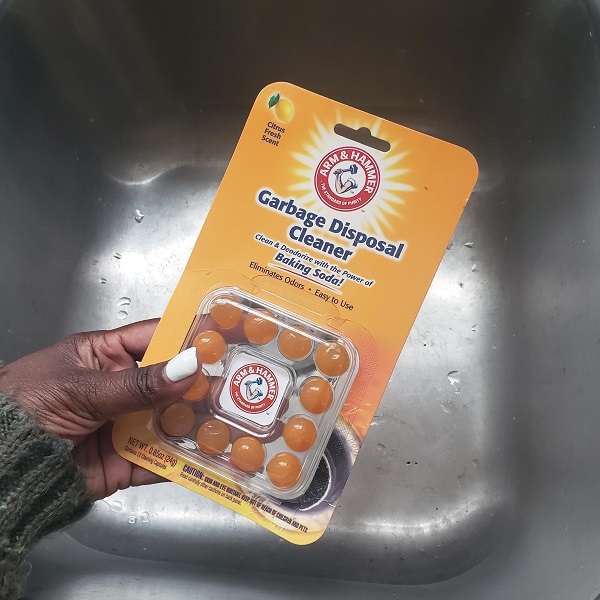 This post is written in partnership with Arm & Hammer as part of a paid ambassadorship.

We just purchased our first home this year. So, naturally, I want to do everything I can to maintain my home with proper care instead of having to spend a lot of money on repairs.

One of the first conveniences I looked into was the garbage disposal.

I read that beyond proper usage and occasional cleaning, garbage disposals don’t require much else in terms of maintenance.

Still, I was wondering how to extend the life of beyond the eight- to 10-year average life expectancy.

What is a Garbage Disposal

A garbage disposal unit (also known as garbage disposal) is an electronic device, installed under a kitchen sink. It’s between the sink’s drain and the trap. The unit shreds food waste into pieces small enough—generally fractions of an inch—to pass through plumbing.

Why Should I Clean the Garbage Disposal

How to Easily Clean Your Garbage Disposal

Since this unit shreds food, there is likely to be some residual scraps left. Food doesn’t smell good when it’s left unrefrigerated. (Think about your kitchen trash can or outside trash can. Yuck!)

It’s cool, dark, and moist, and there’s a near-constant influx of food that gets shredded and scattered about. No wonder it gets smelly from time to time!

To keep gunk and odors to a minimum, make sure you’re always using the disposal with water—before, during, and after grinding food.

You can also extend the life of your unit if you’re careful about what foods you put into the disposal.

Are you supposed to clean out your garbage disposal?

It is recommended that you clean out your garbage disposal twice a week or as needed to clean and deodorize it.

cleans and deodorizes your disposal with the power of baking soda, leaving behind a fresh citrus scent.

Baking Soda acts as a cleaning agent because it is a mild alkali and can cause dirt and grease to dissolve easily in water for effective removal.

It deodorizes by bringing both acidic and basic odor molecules into a neutral, more odor-free state.

The magical ingredient is baking soda. Here is the full list of ingredients in Arm & Hammer Garbage Disposal Cleaner

If you have any questions about the new Garbage Disposal Cleaner, check out these FAQ.

We would also like you to leave a review of the products on the relevant websites: